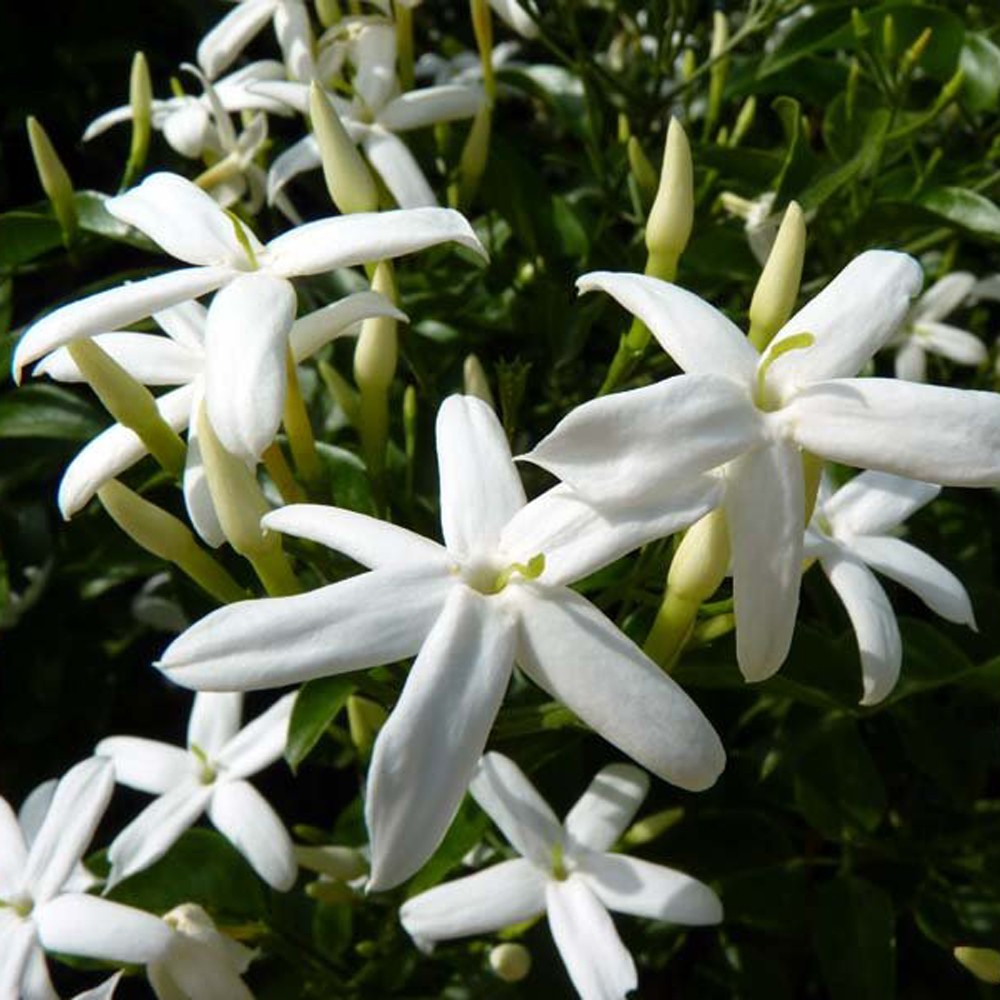 Jasmine is a genus of shrubs and vines in the olive family (Oleaceae). It contains around 200 species native to tropical and warm temperate regions of Eurasia, Australasia and Oceania.

Jasmines are widely cultivated for the characteristic fragrance of their flowers. A number of unrelated plants contain the word "Jasmine" in their common names (see Other plants called "Jasmine").

Jasmine can be either deciduous (leaves falling in autumn) or evergreen (green all year round), and can be erect, spreading, or climbing shrubs and vines. Their leaves are borne, opposite or alternate. They can be simple, trifoliate, or pinnate. The flowers are typically around 2.5 cm (0.98 in) in diameter. They are white or yellow in color, although in rare instances they can be slightly reddish. The flowers are borne in cymose clusters with a minimum of three flowers, though they can also be solitary on the ends of branchlets. Each flower has about four to nine petals, two locules, and one to four ovules. They have two stamens with very short filaments. The bracts are linear or ovate. The calyx is bell-shaped. They are usually very fragrant. The fruits of jasmines are berries that turn black when ripe.

Jasmines are native to tropical and subtropical regions of Eurasia, Australasia and Oceania, although only one of the 200 species is native to Europe. Their center of diversity is in South Asia and Southeast Asia.

A number of jasmine species have become naturalized in Mediterranean Europe. For example, the so-called Spanish jasmine (Jasminum grandiflorum) was originally from Iran and western South Asia, and is now naturalized in the Iberian peninsula.

Jasminum fluminense (which is sometimes known by the inaccurate name "Brazilian Jasmine") and Jasminum dichotomum (Gold Coast Jasmine) are invasive species in Hawaii and Florida. Jasminum polyanthum, also known as White Jasmine, is an invasive weed in Australia.

Widely cultivated for its flowers, jasmine is enjoyed in the garden, as a house plant, and as cut flowers. The flowers are worn by women in their hair in southern and southeast Asia.

Jasmine gave name to the jasmonate plant hormones, as methyl jasmonate isolated from the oil of Jasminum grandiflorum led to the discovery of the molecular structure of jasmonates.